Some of the Funniest things I have seen teaching Divemaster programs 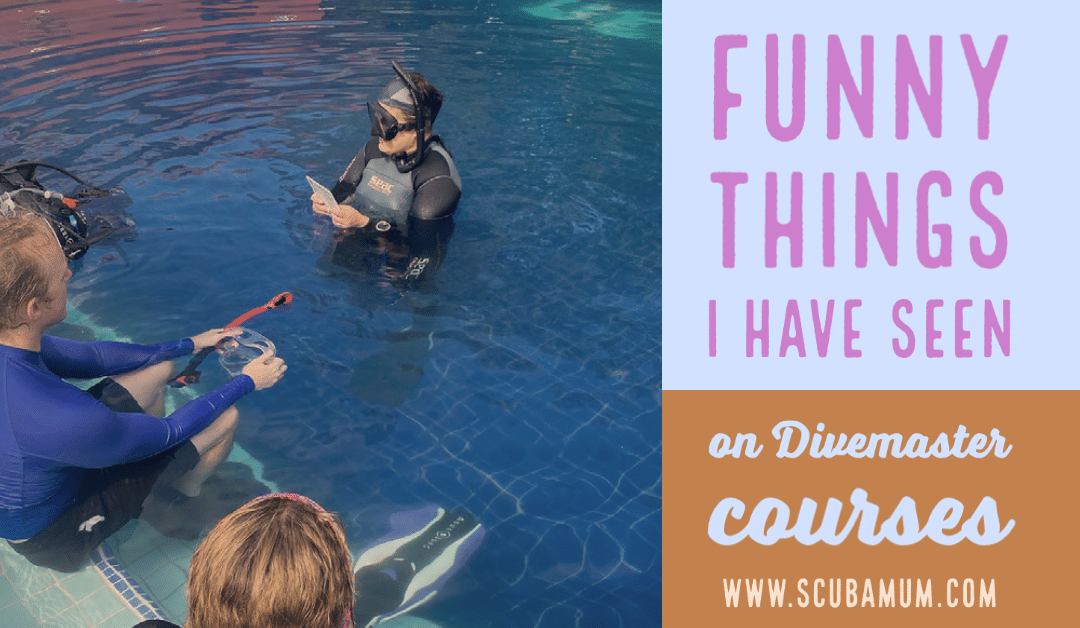 I wrote and rewrote the title of this blog many times. Let’s provide inspiration, no wait, I think a lot of people are bored of that right now. There is only so much “inspiration” you can take at a time like this, especially if you are sitting in lockdown. So instead I went with what do I get asked about and what makes me and others laugh. And it dawned on me. Some of the funniest things that have happened when I have been training Divemaster programs. So here, for your amusement, are some accounts of things that have actually happened during the Divemaster course.

Now, let me be clear before you start berating me. Narcosis, in general is not a laughing matter. It needs to be taken seriously, which is why when you go beyond 18m the first time, you should be with an instructor.

During the Divemaster program you complete the Deep dive scenario. That includes setting up an additional air supply, we use deco bottles and rigging which is fun to use. You also practice navigation at depth and look at all aspects of diving and leading others between 18 and 40m. Now, navigating a heading and reciprocal should be relatively easy for a Divemaster in training. Using a compass should be mastered at this point. However, navigating at 32m, over a sand bottom, when everything looks the same can be a bit trickier.

Visibility is around 15m so I can clearly see the student whose turn it is to navigate. We signal a heading, she gives me the ok and sets off, nice and slowly, signaling her buddy. I don’t move. No need to. Hovering and watching her intently stare at the compass following it. Following it so closely she proceeds to swim in a giant circle. One sweep, then two. As she passes me I signal, get her to check the compass, she gives me an okay, and then sets off again, and repeats the circle. Interesting. The funny thing was, she was convinced she was swimming straight until I explained to her on the surface afterwards what was happening. She honestly thought she was going straight!

I have been in that situation, as have a lot of dive professionals, that sometimes, nature calls, and there is nothing you can do. This happened to one of my Divemasters in training who was assisting with some fun divers. The group surfaced and he was missing. Visibility was 12m, there were only three divers in the group and the guide was moving slowly. Her report, that she saw him just “swim off” away from the group about 20 minutes in.

Once everyone was back onboard, and the clients was relaxing eating cookies and fruit she pulled him aside and asked him what happened. His answer….I had to use the bathroom. Okay, so you could have waited a bit, or should’ve gone before the dive. Nope, he wanted to go then, so proceeded to swim off and leave the group, went behind a rock (yes these are his words) and tried to get his wetsuit down. As he is describing this, I am on the boat listening in and trying to keep a straight face, as is the other instructor. Had problems trying to get his wetsuit off so surfaced (we were only in 10m), managed to get it off went to the bathroom and then couldn’t find the group again. Needless to say, we had a discussion about appropriate actions and then had a good giggle about it later.

Wearing contacts whilst scuba diving can be issue for many divers. One of my Divemasters in training wore glasses and then contacts when diving as he couldn’t get a prescription mask. On some of his demonstrations for the skill circuit, specifically the mask ones, his eyes were closed and just squinting open.

One day we were working on our demos and he started with the underwater mask swim. Starts a little way back so he can just swim towards us for the demo. Beautiful, exaggerated, takes his mask off and starts to swim, but for some strange reason, takes off at a 90 degree angle so is swimming of to the side. Swims for about 3m stops, neutrally buoyant and starts exagerating putting the mask back on. I can tell he is exaggerating from how his hands are moving but he is completely facing the wrong direction with his back to us now. My other students think this is hilarious, I can see the bubbles from where they are laughing coming out of their regulators. He clears his mask and then does a double take once it is back on. Then panics and looks around to see us behind him laughing. He found it funny too.

Balance the work and play

The swim tests are for many one of the more nerve wracking moments during a PADI Divemaster program. I like to give students a heads up so they can be prepared. One morning, I had planned that we were going to do the 400m swim, followed by the float. I had 4 students, who were all bantering between each other about who would “win” even though we know it is not a race.

Morning arrives and one of them is late. I am sitting out on the dock, with the others discussing at what point they need to swim to to then turn around and come back. The last students turns up, clearly smelling close to a walking whiskey bottle. He insists he is fine. Proceeds to dramatically strip down to his speedos, goggles and swim cap (yes he has one) and start stretching, after all, he used to swim competitively (haven’t we all ?! ; ) ). Okay, guys ready, 3,2,1, they all jump/dive into the water. He powers out, gets about 15m out and then stops, shouts back at us and then starts to vomit on the surface. I’m with my coffee and fellow instructor and all we could do, after checking he was fine, was laugh. He managed his float that day but the swim had to wait.

So you see, the Divemaster course, its professional training but we can all have fun with it!