Exploring diving in Costa Rica – Day out in Uvita 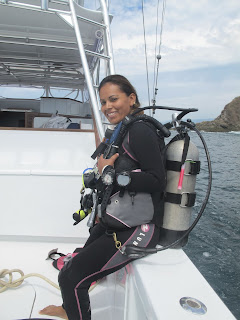 Chance to explore some new places this past weekend. I had the opportunity to head down south to Uvita and Parque Ballena to go scuba diving. We were slightly unlucky in that a swell had come in, (yeah for the surfers, Boo for the divers : )) but nothing was going to stop us. First place we explored was the main island off of the whale tale, which was kinda appropriate considering there was a couple of humpbacks hanging out before we got in. Viz was low but there were some nice trigger fish, snappers and towards the end of the dive we hit a nice wall to cruise along. On the second dive we hit an outcrop of rocks, navigational skills most definitely needed as the viz was reduced even more due to swell and sand movement. Second half again proved interesting though as we found a nice steep wall with a large concentration of fish, and many interesting  cracks and crevices to explore. Saw a glimpse of some large snappers, and plenty of lobster. Nice dives, definitely some good spots to explore again I think. Thank you to our host Jamie and Frenzy sportfishing out of Quepos who were our hosts for the day!

I’ll be working with them again in the near future as we are going to be helping them with a new research project in the Quepos/Manuel Antonio tagging billfish and studying migratory routes. Keep posted for updates and news!