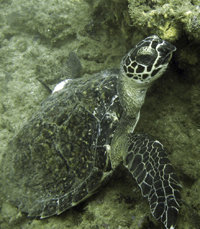 As an important part of the PADI Divemaster internship you need to practice your dive briefings. And who better to practice on at Go Pro Costa Rica than me! So finally the sun shone down on us today and some abnormally grey days for this time of year and we headed out to Canyon reef, one of my favorite dive sites here in Manuel Antonio, Costa Rica. For a first briefing I was suitably impressed by our Divemaster trainee, but I definitely think the fact that she followed her slates to a tee helped, but that’s what they’re there for right?! Anyway, after my thorough briefing we headed into the water and did a nice free descent onto the bottom of the deepest canyon and started to head off in a northerly direction up it. After getting to a good turn around point we back tracked and then headed up the reef towards some shallower canyons to explore a bit more. So far so good, and with minimal movement in the water, there wasn’t too much difficulty negotiating the canyons. Plenty of schooling fish, some grunts, snappers, puffers, but then, as we headed into a particularly small canyon and were faced with a large boulder. Peering over the top, we had stumbled on a peacefully grazing hawksbill turtle. He didn’t seem to notice us at first, but then as we hung out for a while he seemed to clock on and decided to move. However that would mean going over out heads, so…decision time……. After swimming within a meter for a closer inspection he decided against it, went back to his original spot, and continued to eat. Much more fulfilling than checking out the 2 large objects with bubbles coming out of their mouths.

So after that fun encounter, we continued onto the next Canyon, hoping for something else, temptation got the better of me as we headed up another particularly small canyon, at which point a wave rolled in and the roller coaster effect set in. Having experience at negotiating this is key, moving with the surge, using your buoyancy control to steer around rocks and it certainly proved to be a good learning experience for budding future divemasters. What will the lesson be tomorrow?!